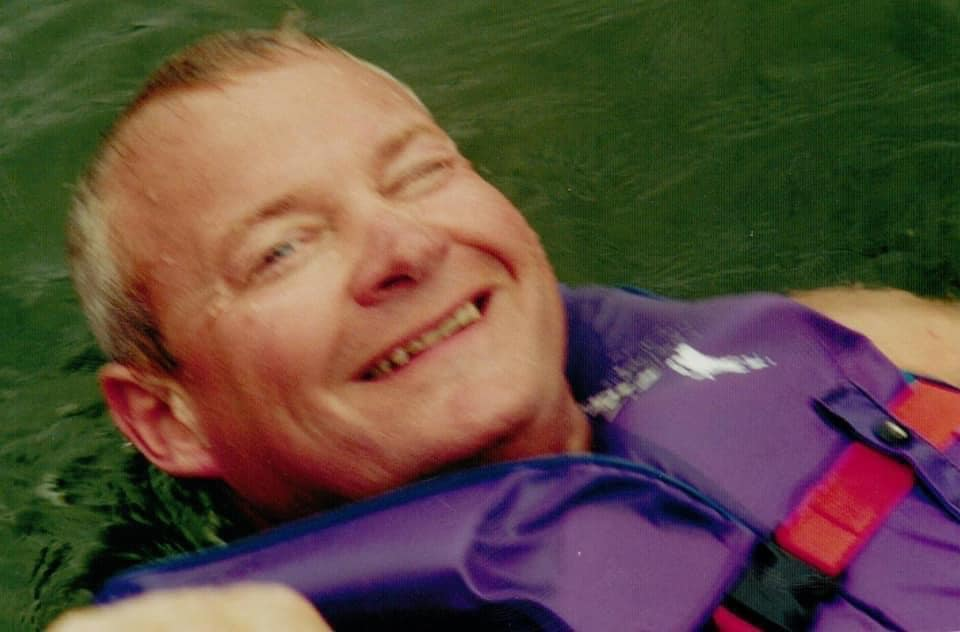 On October 19th, 2011, the City of Kent Fire Department lost Firefighter/Paramedic Don Beckett to a rare cancer that was deemed to be job related. Don bravely fought the cancer for 10 months. Being that Don is our most recent line of duty death, he miss him terribly, as he was a friend and mentor to many of us.

Don started in the Kent Fire Department on August 27th, 1988. He was first hired as a fire inspector in the fire prevention bureau, then was added to the department as a full-time firefighter/paramedic. "Doctor Don", as he became known to us, was the type of paramedic you wanted to have answer your 911 call and the type of partner you wanted to have at your side during a serious emergency.

Don was both extremely skilled and very caring. He set a standard that we all at the Kent Fire Department strive for each day we work. We miss his infectious laugh and his huge smile. His impact on the Kent Fire Department is best described in the following words inscribed on a plaque that we presented to him upon his retirement (just a couple months before his passing). It reads:

"When confronted by a serious fire, we will feel your 'push' to go further. When treating a frightened elderly patient, we will feel your 'urge' to hold their hand. Your impact, although cut way too short, was profound and everlasting. And for that, we will be forever grateful to have worked in your shadow... Thank you, Brother!" 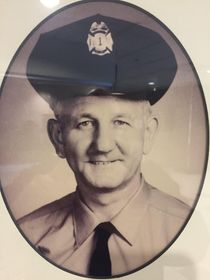 On January 14, 1980, Firefighter Paul Meluch passed away as a result of a heart attack he sustained while working at a house fire on Middlebury Road the day before. Although bittersweet, Paul's wife Helen shared many stories only after saying, "you have to remember the good things...and you try to forget the bad". She then shared how she and Paul were "always happy together".

in 1951, Paul was working for Davey Tree as a purchasing agent. He wanted to expand his horizons, so he started as a part-time firefighter after he asked Mr. Davey if he could respond to alarms while at work. Helen recalls Paul telling her that Mr. Davey promptly responded, "Yes Paul, if it was my house on fire, I'd want you coming to help put it out." So Paul did just that.

He responded to a decade's worth of fires and emergencies at all times of the day, most notable the Revco block fire (now Hometown Bank Plaza) and the Kent State Riots. Paul became a full-time firefighter in 1977. Helen stated that right before his death, Paul was thinking about retiring, however, he didn't know what he would do with his time. She knew he would miss helping people and would miss his fellow firefighters. Paul Meluch was a friendly man with a great sense of humor. He was a handy man who would help anyone needing a hand around their house, he loved to solve their problems.

He also loved his family, especially his dear Helen. A month after his death (on Valentine's Day), Helen recieved a necklace in the mail...a necklace that Paul has ordered for their anniversary. She also received 36 roses - a rose for each year of their marriage - something he did regularly. Helen peacefully passed away a couple years ago and we are sure that Paul met her with a bouquet in hand. 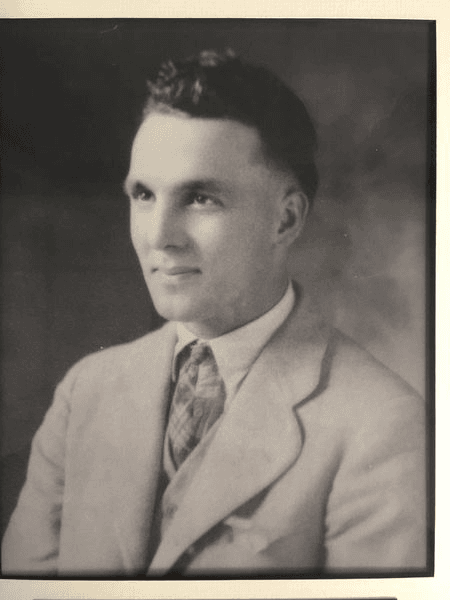 On October 27th, 1933, the City of Kent Fire Department lost their first member in the line of duty. David Barber Jr. tragically died when a wall collapsed on him while he fought a large fire in Ravenna. The fire was located in a group of building off of Cleveland Road, just south of the Erie crossing, that were formerly known as The Manhattan Buildings. The complex was also the original home of the Quaker Mills Company in Ravenna.

Upon their arrival, Ravenna firefighters were met with a large blaze that threatened that entire section of the city. The Kent and Mantua Fire Departments were requested to provide mutual aid, but difficulty was experienced in reaching the departments. The telephone lines going to those areas passed by the flaming fire and had been burnt through. The Akron telephone exchange successfully made the contacts and the Kent Fire Department activated the fire siren to alert other firefighters of the fire.

David was the third firefighter to arrive on site. This was not a surprise to David's fellow firefighters, as he had proven to be a very reliable and competent firefighter since he entered the department on July 15th, 1928. Firefighters were considered volunteers at that time, so for his full-time job, David was the Assistant Superintendent of signal maintenance at the Erie Railroad yards. David was widely known around town. He was kind, friendly and had many friends. But, what inspired David the most was his love for firefighting, for helping others in need.

Once on the scene, the Kent firefighters were faced with the enormity of the task in front of them. Large volumes of fire were now present on multiple floors of the buildings and rapidly spreading. The Kent firefighters quickly went to work, helping their very tired and weary brother firefighters from Ravenna. Together, with the Mantua Fire Department, members from all three departments heroically kept the fire at bay. However, throughout the night, explosions shook the complex and further threatened the firefighters on scene.

Late in the fire, a hose line was aggressively placed to further protect another exposed building nearby. On this hose line bravely stood Kent Firefighters David Barber, Jay Ferry, Ed Smith, and Bob Clark, as well as Ravenna Firefighter Frank Murphy. The hose line was operating through a large doorway when Firefighter Smith noticed the wall was starting to collapse. He immediately yelled out to alert his fellow firefighters of the imminent danger. As a group, the firefighters turned and ran, however, Frank Murphy and David Barber Jr. did not make it safety; they were buried under a wall of bricks. Although injured himself, Ed Smith and the other firefighters frantically dug to find their brethren.

Firefighter Frank Murphy was found first, and other than a minor head wound, he was miraculously not severely injured. Unfortunately, David was found shortly after and it was clear that he had been instantly killed by the force of the collapse. David left behind a wife and two young children. David's wife was consoled by the though that he died doing something that he loved: being a firefighter.

The funeral was said to be one of the largest funerals ever held in Kent. An outpouring of support from area fire departments, friends, and family to the Barber family inspired a very simple eulogy. As such, Rev. W.B. Robinson preached, "I shall attempt no eulogy. David's eulogy is already written in your hearts." The fire truck on which David rode to Ravenna that fateful evening carried him to his final resting place in Standing Rock Cemetery. To David, we say, "Well done brother, we still got it from here." 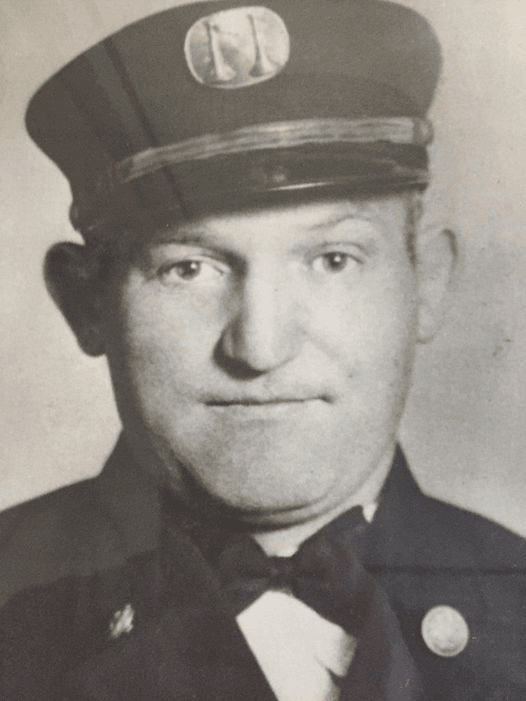 In 1946, Gerald Shanley, or "Chick" as he was affectionately known as, finished his shift at Fenn Dairy (located where the new KSU hotel stands). Gerald was also the Assistant Fire Chief for the City of Kent Fire Department, a volunteer fire department. That day, a fellow co-worker (and fellow firefighter) drove him home to a cottage on Brady Lake that he rented while he completed work on a bigger house on North Mantua Street. Gerald had 12 children and was widowed. He lost his wife, Stella, six years earlier from pneumonia when she was only 39 years old.

When he arrived home, he noticed some children playing on the ice-covered Brady Lake. He warned them to get off the ice, but soon after, he heard cries for help. He and another neighbor, Henry Bowen, rushed to the ice. They found that two boys had broken through the ice. Chief Shanley and Mr. Bowen both found nearby wood to help disperse their weight as they went onto the ice to rescue the children. Chief Shanley made it to the children first and brought one of them back to the shore. He then immediately returned back onto the ice for the remaining trapped boy. However, upon reaching him, the chief broke through the ice.The shock of the cold water quickly incapacitated Chief Shanley, and unfortunately, both he and Paul Beverly (the six-year-old trapped boy) drowned. Their bodies were recovered by the Kent Fire Department at 4:15 p.m. Tragically, 10 of the chief's children witnessed both his heroic actions and supreme sacrifice. Chief Shanley was posthumously awarded the Carnegie Hero's Award for his bravery.

After his death, Judge George C. McClelland was appointed guardian of the children. Through his efforts, and those of the Kent Fire Department, the Shanley children received financial assistance from five sources. Judge McClelland emphasized that the firemen were the "spark plugs who got the thing rolling" in securing the funds to which the family was entitled. All 12 of the children received a monthly check until their 18th birthday. Judge McClelland was proud of the Shanley family, and he recalled that they used the funds to buy a home in 1947. "All of the children have turned out to be find citizens," Judge McClelland added. In addition to the regular funds paid to the family, the fire department paid $100 to the funeral home that was handling Chief Shanley's arrangements, and individual firemen contributed to pay for medical bills for the family.

In 2011, the Portage County Water Rescue Team honored Chief Shanley by naming a water rescue award in his name. This award is given to individuals who have given greatly to water rescue efforts across Portage County. Since its inception, five deserving water rescue professionals have been given this prestigious award. The most recent recipient was City of Kent Fire Department Captain David Moore in December 2021. Captain Moore was awarded for his 20+ years of water rescue service to our county.