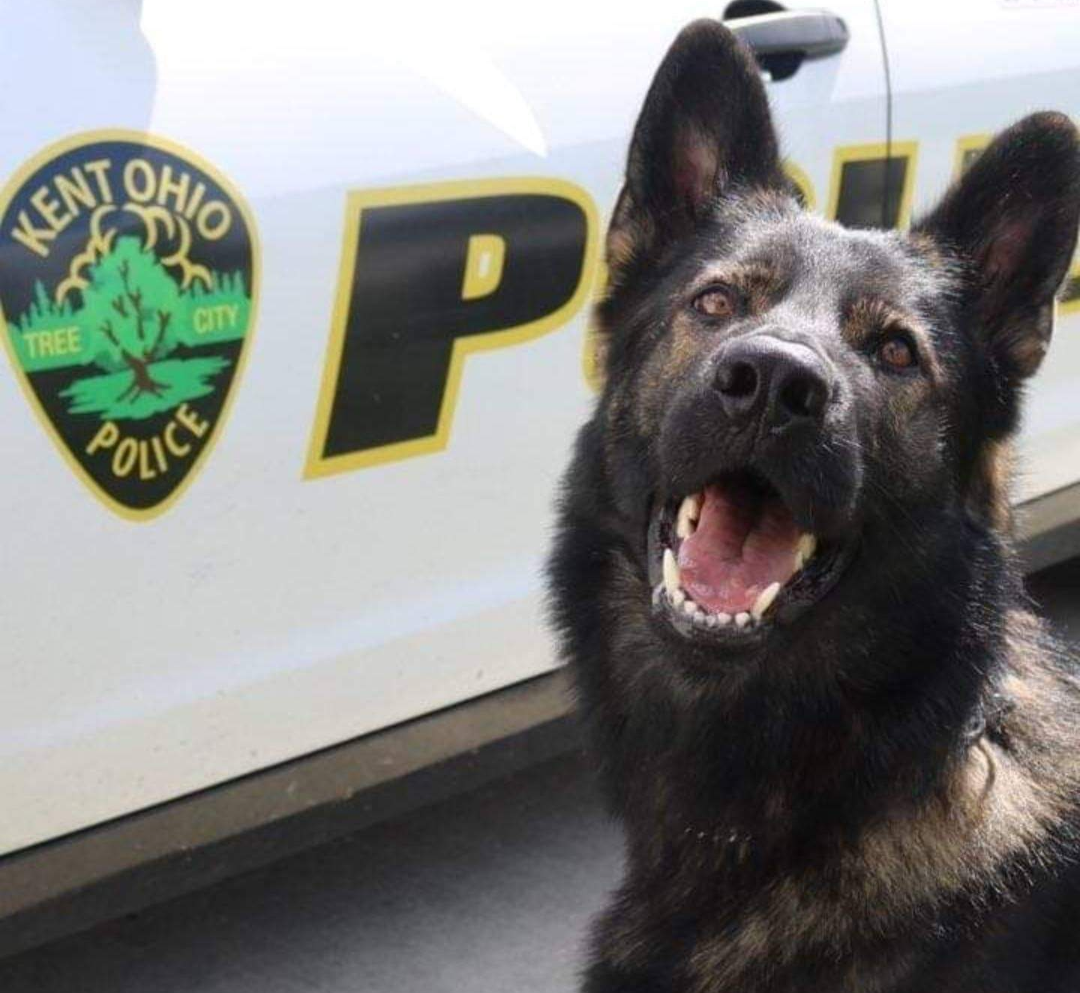 The Kent Police K9 Unit was started in 1987 by Patrolman Don Miller, who took it upon himself to start the program from scratch, without funding from the Police Department. He used his own dog, Duchess, who he trained and had certified in Patrol through both the North American Police Work Dog Association (NAPWDA) and the State of Ohio.

View a photo gallery of former and current Police K9s.

After Patrolman Miller and Duchess were certified, Patrolman Karen Travis began working on certifying her dog, Gonzo. After 6 to 7 weeks, he was certified through NAPWDA and the State of Ohio, making Patrolman Travis the first female handler in the state.

Both dogs were well-received, doing numerous demonstrations for both the community and other police departments. These demonstrations led neighboring departments, such as Ravenna and Mogadore, to start their own K9 programs. Due to the success of these K9s and their handlers, the Kent Police Department decided to fund the program.

In late 1991 and early 1992, the Department conducted a K9 assessment for interested officers. Patrolman Haury was selected and paired with Roy (pronounced Ro to ee), who was trained and certified in patrol through NAPWDA and the State of Ohio. They made a great team, making multiple criminal apprehensions during their career together.

Patrolman Gilliland was the next handler selected and was paired with Arid, who was trained in Pennsylvania for seven weeks and certified in Patrol through NAPWDA and the State of Ohio. Arid excelled in using his nose to locate people, and was tested to see if he had the proper drive for narcotics detection. After an additional four weeks of training, Arid and Patrolman Gilliland became the first K9 unit to be dual-certified in Patrol and Narcotics.

When Roy was retired in 1997, the next handler to be selected was Patrolman Brand. He worked with Gandur, who was dual purpose trained in Patrol and Narcotics. Gandur excelled at scent work, being able to detect small amounts of drugs when searching. He was also very good at crowd control.

After Patrolman Gilliland retired Arid, he took on another K9 named Damon. As was the case with Arid, Damon was also dual purpose trained in Patrol and Narcotics. Damon was a tremendous tracker and very protective of Patrolman Gilliland, coming to his aid on one occasion to help with the physical apprehension of a wanted felon who was violently resisting arrest, thus allowing Patrolman Gilliland to take the suspect into custody. By the time Damon succumbed to cancer in 2004, he had touched so many people in a positive way that the wonderful people at Memorial Animal Hospital coordinated with many people, specifically the Kent Rotary, to raise enough funds to get another dog.

Patrolman Gilliland wanted to continue with the program and was given the opportunity to work with another dog, Bak. Bak was trained in Patrol and Narcotics Detection and certified through NAPWDA and the Ohio Peace Officer Training Academy (OPOTA). Unfortunately, he only worked for a little over a year, having come down with a rare infection that was caught in its advanced stages, killing him at the very young age of 2 1/2 years.

Patrolman Jacobs and his K9, Codi, began training in February of 1999. Codi was a utility dog, trained in Tracking, Narcotics, Building/Area Searches, Article Search and Apprehensions. Narcotics were his strength, with his biggest drug seizure being 77 kilos of marijuana from a mutual aid call in Brimfield Township. He was also very useful in crowd control during the May 4th riots in 1999 and 2000.

In 2001, Patrolman Jim Ennemoser was chosen to participate in the K9 program. He trained for 16 weeks with his partner, Jessy, who was certified in Narcotics Detection, Tracking, Building Search, Area Search, Article/Evidence Search and Handler Protection. Jessy was responsible for numerous successes. One such drug find was in May of 2008, when Jessy alerted to the presence of narcotics in an airplane that had landed at the Kent State University Airport. 30 kilos of cocaine were discovered. In another incident, Jessy located three suspects who had attempted to steal a car at gunpoint, tracking them for several blocks and locating them inside a house.

A generous donation from the Kent VFW in 2007 helped to offset the expenses of a new dog. Patrolman Gilliland was given another opportunity to work with the program and was paired with Felo, who was chosen for his dominant/confident demeanor. They completed six weeks of training and were certified through NAPWDA and OPOTA. Felo made numerous criminal apprehensions and drug finds since being certified, and was allowed to retire with Patrolman Gilliland in June 2013, by a special ordinance passed by City Council.

Currently, K9 Aiko is on the road with Sergeant Jim Ennemoser. They began a six week training course in May of 2009 and were certified in June of that year through the State of Ohio, NAPWDA and the National Association of Professional K9 Handlers. Aiko has achieved numerous accomplishments since being certified, some of which are tracking and apprehending a burglary suspect who assaulted the home owner and apprehending another burglary suspect while the residents were upstairs, locked in a bedroom. On another occasion, a traffic stop that was a joint operation with the Cleveland Drug Task Force resulted in the confiscation of $150,000 cash and 10 pounds of marijuana.

The newest member of the K9 Unit is Iron, who is partnered with Patrolman Poe. Iron is a Czechoslovakian-born German Shepherd who had gone through 6 weeks of training with his partner, and they have now been working together for approximately 3 years.